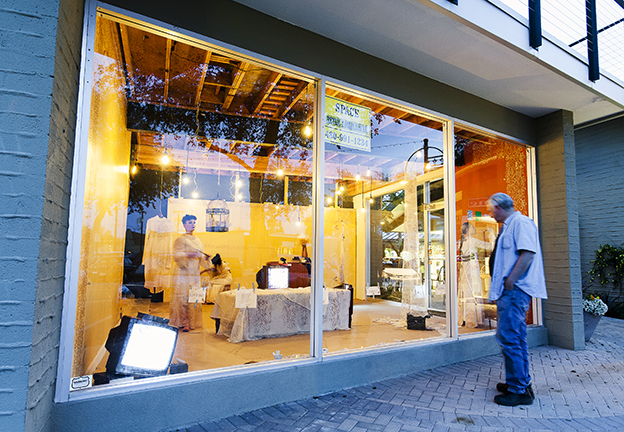 On view through October 2013

Loosely inspired by Virginia Woolf’s A Room of One’s Own and the concept of a ‘memory palace’ first attributed to the Greek poet Simonides (556-468 BC) and further developed by Giulio Camillo (1480-1544), Memory Room is a durational multi-media performance installation that investigates the relationship between women, writing, and memory.

A ‘memory palace’ is a mnemonic system to spatially organize memories using specific ‘loci’ or spatial locations organized along a predetermined path. When items need to be remembered, one walks along the path to recall one memory at a time.

Expanding upon Camillo’s concept of the ‘memory theatre’ or ‘theatres of memory,’ Memory Room layers a series of ‘memory palaces’ of women writers—Emily Dickenson, Zelda Fitzgerald, Simone de Beauvoir, Virginia Woolf, Audre Lorde, Anne Sexton, and Sylvia Plath among many others—all women who made an indelible mark on the world of literature.

Over the course of three months, at designated times, a ‘memory keeper’ marks the space with fragments from notebooks and journals of these women. The performances continue until the entire space is filled with writing. All activity inside the room is recorded and documented through 3 surveillance cameras as well as the live feed of the action streamed on the 3 TVs in the space.

Special thanks to the School of Theatre and Film at the Herberger Institute for Design and the Arts for the use of props and technical resources.

This artwork was commissioned by Scottsdale Public Art.